Driving to Italy isn’t really a big deal from where I call home. A little more than 3 hours by car and you’ve already transgressed into a different culture, a distinct change of rhythm, and an amazing plethora of culinary possibilities to savor. The trick is to try and avoid traffic at all costs, especially at the Gotthard tunnel, which measures 16.9 kilometers, or 10.5 miles long. Getting stuck in or around that pass can be a claustrophobic mess as if passing through that tunnel isn’t spooky enough…I simply could not bear it without turning up the jam and singing at the top of my lungs – all the while yearning to see the light at the end of the tunnel, which gratefully always comes. I seriously lost count of the number of tunnels that I passed through on the way down, it must have been about 35 plus – but none is longer than the Gotthard. The landscape is astoundingly beautiful in good weather – there are plenty of village-perched lakes, waterfalls and snow-capped mountain peaks that leave you oohing and ahhing all the way down.

I have the great fortune of having dear friends who live on the Lago di Como in Lombardia, Italy –  in Cernobbio to be more precise. These folks are something like substitute parents to me, but even more than that, they are true friends, outstanding discussion partners, and the lady of the manor is an absolute wiz in the kitchen. Fabrizio and Pucci have been married for over 53 years. She is in her early seventies, and he just turned eighty.  Over the years they have lived in Hong Kong, Palermo, Zürich, and Lausanne, among other places, but have since lived more than 20 years happily at home in the community of Cernobbio.

Pucci is a multilingual spitfire who loves to travel, read, and cook. She reminds me of a mini tornado that spins around all day long – starting early at the outdoor market at 7:30 AM, then perhaps on to the gym, and at home she is always either cooking (or planning on what to cook), in the garden, or keeping in touch with the many friends they’ve made over the years spread out all over the world via Skype or telephone. Fabrizio is the kindest man you’ll ever meet who loves a good laugh and spending time with friends and family. He is both wise and totally easy-going. The man seriously hums all day long. Priceless joy.

First of all I love visiting them because I love sharing time with them – they are so full of insight and humor, travel stories, and well, you can talk with them about pretty much anything and it’s a good time. They continue to have such an active interest in what’s going on in the world and still travel abroad. They have been on journeys that one can only dream about (Syria, India, Morocco, Indonesia, etc…). Their favorite getaway these days is a seaside resort in Egypt once it gets a bit cooler here in Northern Italy in the wintertime. They also have two grown children, and two grandchildren who live out of the country, so spending time with them is also a priority, even though they admit that age induced laziness sometimes gets the best of them when it comes to going up north for a visit . But they are quite happy and comfortable where they live, and that’s not a bad thing either. They remain young at heart and keen in mind and they both inspire me to stay that way.

The sad thing is that as they are getting older, they are losing some of their closest friends in the community. Two in particular I remember spending time with was a woman named Marisa Sacco, and another woman named Jean Salvadore.

Marisa was an outspoken woman with whom I had the honor of sharing her 90th birthday with. After they brought out the cake to sing her Happy Birthday she stood up with her glass in hand and declared “Va funculo Berlusconi!!”. Basically… Fuck off Berlusconi! (He was still really relevant in Italian politics at the time). At that moment I knew…I want to be exactly as fearless and expressive when I am that age… and start practicing now. 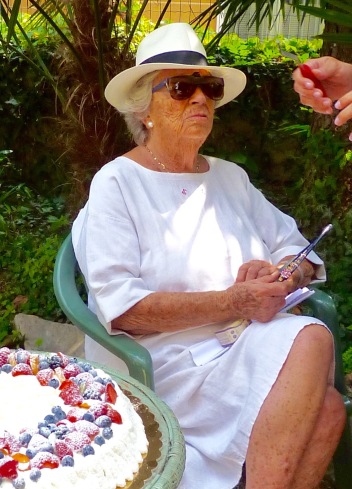 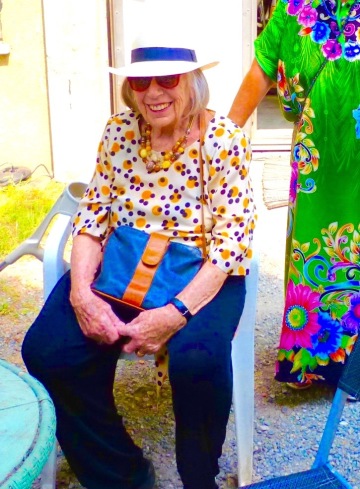 The other woman’s name is Jean Salvadore, who was the director of PR for the Villa d’Este here in Cernobbio for more than 40 years. She wrote a book about her experience as a PR director for this amazing hotel on the Lago di Como in  My Dolce Vita: A Memoir , in addition to several cookbooks.  She was humble and kind, and had so many interesting stories to tell about of the celebrities from past like Audrey Hepburn and Elizabeth Taylor that she had come into close contact with.

Sadly, both of these remarkable ladies have passed away since my last visit here almost four years ago, but then again, they made it into their nineties and that alone is a big accomplishment. I miss seeing these lively donnas in the mix here, but their legacies still remain, and they will never be forgotten.

On my visit last week, the Gambinos invited good friends Enzo, Jaks, and Benny the dog over for Sunday lunch. I kid you not, we stayed at that table eating, drinking, talking, and laughing for over 4 hours straight! And this is not the first time that I’ve enjoyed the experience of practically staying at their kitchen table without leaving for 2 meals in a row – several hours apart.

One thing never changes here – when I arrive I instantly feel at home. I am always welcomed with broad smiles and heartfelt hugs. L’aperitivo with wine and cheese and regional goodies is customarily on board from the get-go, and the conversation flows under the beautiful wisteria draped veranda. It smells like honey and lemon tree blossoms here. Grazie mille Pucci e Fabrizio. 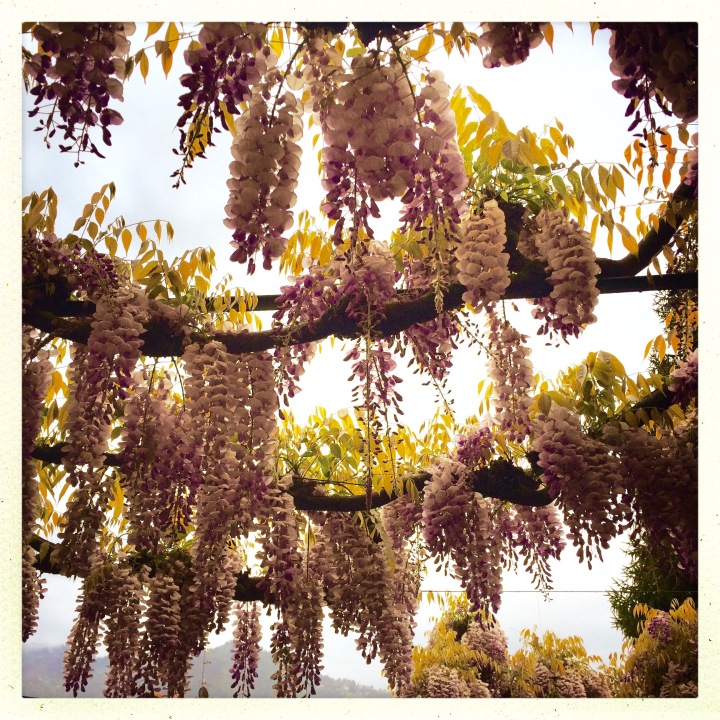 All photos were taken by June Liechti-Adamson

2 thoughts on “A solo road trip to Cernobbio, the Gambinos, and the neverending mealtime.”